Well, today's Labor Day and, as I said yesterday, I'm going to be working.  Yepper, I'm going to be closing out the store meaning I should be home by 2230 - hopefully.  The only things that make working on a holiday half acceptable are the fact that we're going to be fed, and that I can use my DD214 to get a 10% discount on all of my purchases.  That's right, I'm a Veteran.  Yippee!  I'm going to be repainting my living room and will need to take down the wallpaper boarder along the ceiling so today I'm buying a steamer at... you guessed it, 10% off.
Recently John over at Going Gently has been dealing with someone commenting anonymously.  I have a very low opinion of people who do this believing they are spineless, gutless and haven't the balls to give their voice a name.  I can only presume this person to be a Republican since they only seem to speak out when they're huddled together like a mass of hyenas howling at some Trumped up moon of an asshole.
Deus Ex, Mankind Divided has just come out and, of  course, I'm playing it.  The main character is an augmented man named Adam Jensen, augmented meaning he's pretty much a cyborg, sort of like the $6 Million Dollar Man.

This is a stealth game rather than a shooter.  You get more points by sneaking up on the villains and knocking them unconscious then you do by just shooting them.  In fact, one of the things that makes this game so difficult is you need to explore and find alternative routes in order to avoid those people who want to kill you (or Jensen).  The stealth bit is actually a lot of fun. 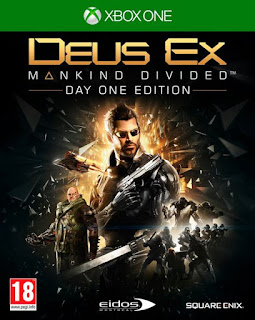 I bought it on Xbox One, though it's available on PC and PS4... oh, and it has an adult rating because there is violence, language, and some nudity (so far just Jensen in the shower with a lot of steam).