The art of being Pretentious

Back when I worked for Marriott, I got to know some of the local artists, in fact, one of my friends would model occasionally, not that he was ever recognizable.  I remember being at a show where two women were considering whether to buy a large painting and he was all excited.  "They're going to buy one of my nudes," he'd exclaimed.  Walking over I found myself looking at a lot of brown swirls, and ochre lines shooting off in different directions.  If you stared at it long enough you might be able to pick a nipple here and a nipple there.  I managed to count at least 4 different penises (at least that's what I thought they were) and I can tell you, my friend is not that blessed.  I did like the painting but would never have spent that much money for something that was way too big for my house.
I bring this up because I have friends on Facebook who like to think of themselves as artists - they take pictures - lots and lots and lots of pictures.  Some of their other friends fawn over these pictures.  I don't.  The truth is that most of them are just pictures.  These people post albums and nothing really stands out.  One of these friends is constantly trying to enhance her pictures with special effects so we'll get an album with 15 sepia toned pictures of her dogs.  She doesn't understand that the picture needs to be able to stand alone.  Once you start tinting it, and adding halos, while some may still may consider it art, it's no longer a photograph.  It's no longer a representation of the real world.
Then there is one who is just way, way too pretentious.  She will post pics she's taken from "her studio" window of the flowers her lawn, or of the "3rd step in a long climb up the Stanford Lighthouse."  Every time she posts I just sadly shake my head.  This is an example. 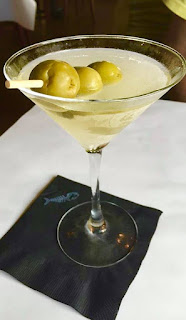 In the comment section, she'd noted that she'd taken this while having lunch with a cousin she hadn't seen for quite some time.  This would have been okay if she hadn't added these 3 little words "I drank water."  Maybe she took this because the glass is off center, or because the 'Bonefish' is upside down, or perhaps because of the olives, I don't know, but the minute she added that last, little sentence she became pretentious since those words become the focal point, not the martini.  She drank water... who cares?