South of the Border

Well, the boarder is down, and what a challenge it was.  My house was built in 1905 and back then ceilings were high.  That's right, I have 10' ceilings on the first floor (ground floor for some of you) and the only way to strip off the border was to straddle a 4' ladder, steamer plate in one hand, plastic scrapper in the other.  And that was after I moved all of the furniture to the center of the room.  Once I got the rhythm going it was like peeling a banana, except for the south wall.  The west, north, and east walls were easy, but that south wall was a bitch.  Way back when, that was the first wall to be bordered, enthusiasm was high and the pre-pasted paper was allowed to soak longer in the water before being applied.  This meant a longer drying time, thus giving the paste a longer period to soak into the plaster wall.  Where the rest came off in strips, on the south wall it was steam, scrap, and then steam, scrap. 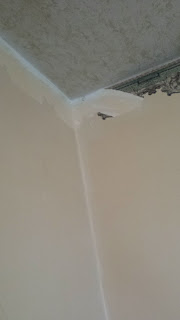 In the picture above you can see the pastel peach color the walls were originally, and what 17 years of time did to that color.  You can also see a bit of the border which I really, really did like at the time.  You can also see a bit of the rag-rolled ceiling which a friend and I put up while working out way through a case of beer, pausing occasionally to watch "Titanic" which I had playing on the TV.  The whole room is changing.  It's about time.