Yesterday was one of the ho-hum days at work.  I had to open the store, which I hate.  We are starting a new scheduling system and hopefully that will happen only on very rare occasions.
I did see that one of Trump's brats is getting a lot of crap because of his plagiarizing and photo from Twitter, one that was taken by a refugee and posted some years back.  One of the many problems with the Trumps is that they are used to doing what ever they want with absolutely no accountability.  They do what they want, they say what they want, and no one has ever said "hey, stop being an asshole."  They don't realize they're assholes, they just think they're special.
And from what I've been gleaning from the Internet, Hillary seems to have turned the corner and is once again slowly moving a head of Trump.  I suspect his putting a stake in the heart of his Birther lies has something to do with that.  He pushed that for years because he wanted to, I mean, why would he, Donald Trump be concerned that it was a lie.  He says what he wants because he thinks he's special.
And finally, yesterday morning I got called back to one of the pre-fabricated shower stalls.  Something had  been found.  Crap.  Anyway, when I got there found several people gathered, staring downward.  This is what they were looking at. 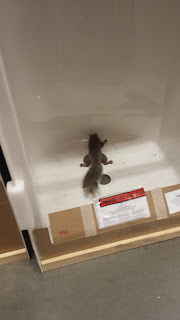 That's right, we had a squirrel in the building.  He had, unfortunately, already gone home to Jesus, so all we could do was pop him into a box and put him in the dumpster.  Someone suggested that might be a hazmat issue, but when you stop and think about all the garbage coming out of our lunchroom I somehow doubt that.  We think he tried to jump to one of the steel girders making up our roof and couldn't grab hold and... well, fell to his death.  Sometimes this is how life ends, dramatically, with a fall.
Posted by Dave R at 7:55 AM