So, I wen to see Elton John last night at the Giant Center. 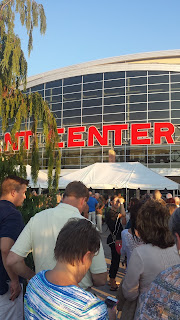 This is the 5th time I've seen him in concert, the last time was some 30 odd years ago.  The only issue I had, and it was minor, was with the start time.  When I bought the tickets from TicketMaster the start time was 7:30 so that's what I put in my calendar.  Three days ago I received an email from TicketMaster reminding me of the show and listing the start time as 7:30, the start time on the ticket itself, however, was 8:00.  We got their early, and waited.  The show actually started around 10 minutes of 8.
His first song is probably my all time favorite - Funeral for a Friend / Love Lies Bleeding.  I'm proud to say that way back when I pledged Phi Mu Alpha Sinfonia, I played that for my audition piece.  I can probably still play it, if I want... with mistakes most likely. 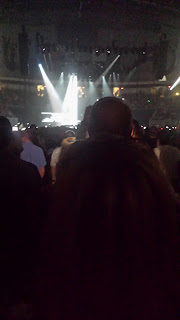 Seeing him perform it live was great!
He played 2 songs from Madman Across the Water, Levon and Tiny Dancer.  The audience reaction to Tiny Dancer was,,, amazing, high pitched squeals of delight, what you might expect if it had been 16,000 gay men in attendance and Ryan Gosling had suddenly stepped on stage and started to strip.
There were lots of songs from Goodbye Yellow Brick Road, including the title track.
And he was very loud, in fact louder than I was expecting.  You could feel the floor vibrating, and when he played his way through that lovely lesbian love song All the Girls Love Alice my Aqua Fresh water danced around in the bottle as though a T-Rex was approaching, which was very, very great!  From Tumbleweed Connection he played another of my favorites Burn Down the Mission, and from Don't Shoot Me (I'm only the piano player) Have Mercy on the Criminal and Crocodile Rock (his encore).
A fun time was had by all!  Even the balding, middle-aged guy in front of me who was definitive proof that some white guys just can't dance.