By now I suspect everybody knows who Michelle Gregg is, if you don't, she's the mother of Isiah, the toddler who either climbed over, or under, a wire fence and then under about 3 feet of bushes to tumble into the Gorilla enclosure at the Cincinnati Zoo.  There's a lot of 'mother shaming' going on right now; a lot of hate is being directed at her.  People are saying she's a bad mother.  I don't think that's true at all.  Hundreds of thousands of people have signed petitions blaming her for the death of a Wetlands Silver Back teenage Gorilla named Harambe.  While I'm not as vocal as some, I do agree responsibility needs to be placed on someone's shoulders, and that someone, unfortunately, is Michelle Gregg.  She claims she was distracted by other children.  Had she been driving a car and mowed down a pedestrian because other children had distracted her, well, she'd be responsible.  Those coming to her defense are saying it was a bad accident.  Accidents don't just happen.  They are caused by irresponsible behavior, moments of negligence, and bad judgement.  Ms. Gregg is an administrator at a pre-school.  She is surrounded by children her son's age constantly.  She knows how fast they can move.  This credential alone should have made her more diligent in the supervision of Isiah.  This was not the case at all.  Evidently, after she found out a child had made it through the barrier, she had to ask what color shorts he was wearing in order to determine it was indeed her son.  Do you see where I'm going with this? 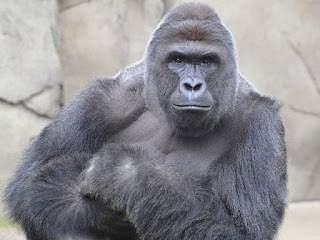 She had no idea where her child was.
Is Michelle Gregg a bad parent?  No, I don't think so.  This doesn't mean she's the best parent.  I suspect she does an adequate job.  Is she responsible for the death of this gorilla?  Absolutely.  Accidents like this don't just happen.  There is always human error involved.  Because of her lax judgement an animal on the endangered species list had to be destroyed, and that's a terrible price for not paying attention.