Stumbling out of the Starting Block

Well, it's Sunday.  I'm not in a park, nor planning to go to one.  And there is no one around named George.

I did work yesterday.  I was surprised because we were busy.  It was almost to the point of being hectic.  There's nothing wrong with being busy.  Time does fly by.  On days when it's slow, I spend a lot of time looking at my phone.  That didn't happen yesterday. I did work until 5 PM, however, and when I walked out of the store the sun was still above the horizon.  This is a good thing.

Biggie's new bed arrived yesterday.  As you might expect, he didn't sleep on it.  He did walk on it a few times, but that's about it.

Later this morning, I'm going to head to my neighborhood Giant supermarket.  I need olives, as well as a few other sundry items.  There is one large chore planned for today.  I want to wash down the kitchen ceiling.  Prep work prior to painting.  It's going to be the same color as the rest of my ceilings, Garden Rose White.  That's a nice way of saying that it's going to be a shade of white.  Here's a hint for you wannabe ceiling painters:  a touch of tint softens the harshness of pure white.  You want a creamy white.  Pure white is sterile color.  This is what mine looks like. 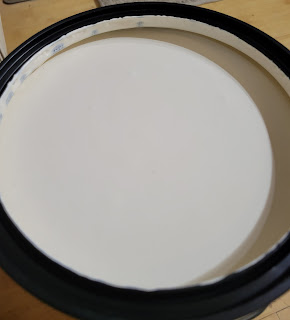 The headline this morning from the Hill is:  Republicans stumble out of the starting block.  That's rather an understatement.  As someone said a while back, they live in a universe of their own creation creating truths that fit their own selfish needs.  Criticism is being heaped on them from just about every side and they honestly believe that if they say nothing it will go away.  They also desperately believe that if they can create a big enough diversion people will ignore the fact that they are devoid of leadership of governing skills.  Their main goal is to say "shut up, we're in charge."
Their second goal to so satiate the hunger of their base.  Knowing this, I was not surprised to see that their first piece of major legislation will be to stop the hiring of 87,000 IRS agents.  Their base hates taxes.  They hate the IRS.  This is why the new Speaker of the House, Marjorie Taylor Green, has announced that their first thing this new congress is going to work on is the elimination of those new agents.  The fact that any bill they pass regarding this will be DOA when it gets to the Senate doesn't phase them.  It's not about governing, it's all about shoring up their party for 2024.