Well, it's Tuesday.  I slept late again this morning, possibly because I'd slept so poorly the night before.  Ingesting so much pasta after 8 PM is definitely not conducive to my getting a good night's sleep.  Note to myself:  don't do it again.

Because attendance had been so low at the party (which wasn't really a party), there was lots of food left over, mainly pasta.  I worked for 4 hours yesterday, which means I had a bowl.  Not a big one.  It had red sauce.  meh.  Since I make my own at home, I'm a bit of a stickler about sauces, and I can tell you this one tasted like it had been poured right from the can.

The indoor dryer exhaust I bought requires a filter pad which needs to be changed.  Individually, they last about 1.5 months.  Sadly, they also cost $16 for two.  Being the creative person I am, I'm going to improvise, using chair batting (very inexpensive) rather than the filters, which I think are pricey.  I should be able to get 24 filters pads for $12.

And I started replacing the circuit boards on my treadmill yesterday.  I was a bit leery at first since I've never done anything like this before.  It turns out to be rather easy peasy.  Taking a picture insure you plug everything back correctly, pictures like this.  Oh, and wear gloves since the oils on your fingertips are not kind to circuit boards.  Oh, and if you have a color printer, it doesn't hurt to print the pic off. 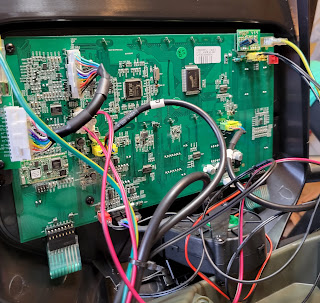 George Takei runs a small media outlet called SecondNexus. They posted a survey from Civiqs showing Republicans are growing very unpopular.  That should surprise no one.  Remember, Republicans are only concerned about their own self-interests.  While they like to call themselves conservative, the America they work for has roots in authoritarianism.  Civiqs leans left, it's surveys are open to just about anyone, which means it can be stacked by either liberals or conservatives, so, let's say it's fairly accurate.  Even if it's only fairly accurate, and not quite 64% of Americans don't like the Republican party, there's still a good chunk of Americans who believe they're leading us down the wrong path.  This is not good.  The longer they are in charge, the more they hurt themselves.  Telling Americans it makes sense to raise the age for Social Security because people want to work longer does not put them in a win / win situation.  But then most of us know their brains started to short circuit a long time ago.