And so it continues

Friday.  Stayed up late.  Got up early.  I'll probably take a nap sometime this afternoon.

Yesterday was fine.  I talked to, at best, 3 customers at work.  Tis not the season for flooring installations.  I still have access to the numbers for the district.  All stores are down in revenue.  Very shortly they're going to be cutting part-time hours, no doubt there.  That's why I saved my vacation and my personal time.

I began watching The Rig last night on Netflix. That and Amazon Prime are the only two networks I can stream.  For some reason, my 7 year old Sony Bravada smart TV is not updating anything.  In fact, I can't even update Google without getting an error message telling me to check my Wi-Fi. Since I don't have cable, I'm dependent upon Wi-Fi, and that's working quite nicely.  Since I mostly use the TV for gaming, my alternative is to sign up for these streaming services using either Microsoft (Xbox), or Amazon.  Believe me, that's a lot less expensive than buying a new TV.

And for anyone who thinks that the Republican shit show is going to go away anytime soon?  Well, that ain't gonna happen.  We're looking at 2 years of dipshitery if McCarthy some how manages to get elected Speaker.  And if he does find a legitimate reason to stay in Nancy Pelosi's office, who knows for how long.  A month maybe?  It seems as though the only thing he hasn't promised those 20 insurrectionists holding the House hostage is his first born son... at least not that we know of.

Oh, and evidently Kevin McCarthy still doesn't have the votes.

And now for a bit of a palate cleanser.  I took this picture inside a Buddhist temple while on a tour around Mt Fuji a long time ago. 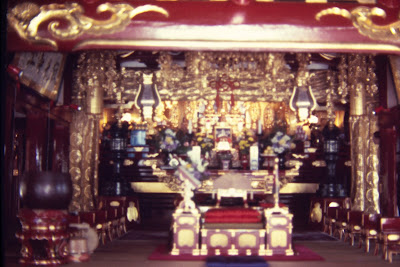 Today is also the anniversary of the Insurrection.  Some say the 20 insurrectionists will vote for McCarthy today as way of getting a win to celebrate.  I'd be surprised if they do.  This is not about Kevin and his lack of qualifications, it's about disruption.  It's about creating a stink.  The Democrats are doing quite well by just sitting back, snacking on their popcorn, and voting for Jeffries.  Dragging this out only hurts the Republicans, not that many understand this.  It's up to them to do the right thing.  Nominating a very moderate Republican, one who the Democrats could accept would do 2 things:  1) end this shit shoe; 2) piss the hell out of the 20 insurrectionists.  Will they do it?  We'll have to wait and see.