Today is the 2nd day of 2023.  If you're of a certain state of mind, the days are going to get funner.  Some will have the sadz.  Some of the latter deserve what they get.  Karma.

Rather than climb the stairs to sleep on the bed, Biggie has decided to start sleeping down on the sofa in the writing room.  Surprise!  He didn't bark during the night for me to let him out.  No potty outside.  I did check to make sure he didn't toddle off like a sleepy two year old bleed his little weasel (old navy term) quietly in some corner.  I suspect this proves that all of his midnight jaunts downstairs to "go potty outside" had an ulterior motive: a midnight biscuit snack.

I've had my first big boss fight in Evil West.  Here's a tip for you all, shoot and roll, and then roll and shoot, and don't forget to use your gauntlet on the minions.

Tomorrow I have to get a haircut.  I hate haircuts.  Someone suggest I shave my head, so I politely reminded them that shaving your head is just another form of getting a hair cut.

The only time I drink coffee is in the morning.  Sometimes I drink Maxwell House, sometimes Folgers, depending upon which is on sale.  I also, usually 2 - 3 times a week will make coffee from freshly ground beans.  Rather than purchase bags of beans from my local, neighborhood Giant, I'm been ordering them on line from smaller companies.  Some are very good, and some... not so very good.  This one is very good. 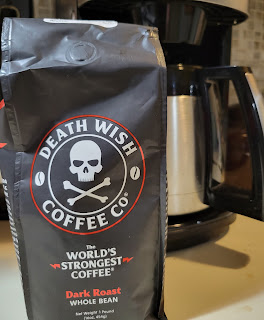 And the new political year starts tomorrow.  Today is a holiday for them.  From what I understand, Kev McCarthy is one of those with the sadz.  It looks like there will be several votes before they decide on Speaker of the House.  Kev, who's offered his soul to any and every demon who might help him win the coveted position is in a bind, not enough demons are on his side.  The American Freedom Caucus only have enough votes to disrupt, not control.  This is actually good for America.  The more they disrupt, the more the truth comes out about them, that they're in favor of a Republican authoritarian government.  The more this truth comes out, the weaker they become.  The weaker they become, the more repulsive they become.  This is how a political party dies.  Unlike the Phoenix, they will not rise from their ashes.