Sometime last night a dusting of snow fell.  The morning sun is going to melt it away pretty damn fast.  That's fine.  Except for that Cyclone Bomb that froze our tidily winks off back around Christmas, this winter's been more temperate than usual, at least here in Central PA.  Everyone who pays a heating bill appreciates that.

Biggie has evidently decided he's no longer going to be sleeping on the bed.  He's also decided that the new bed I bought him makes a decent pillow.  Go figure.  My biggest challenge is sleeping on more than an eighteen-inch wide strip at the edge of the bed.  I'm making progress.

I baked a peach pie yesterday using some of the peaches I froze.  It's... okay.  I don't remember baking one before, and instead of looking at a recipe I sort of, well, winged it.  It's tasty, but it doesn't really have a peachy flavor.  I did mix in some walnuts because I like nuts.  I think I'll use my remaining peaches to make cobblers, they're easier. 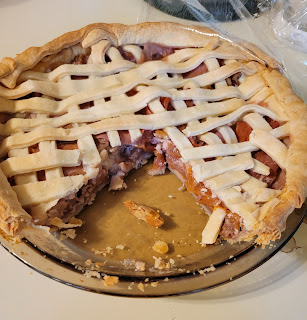 I saw where Maggie Green has suddenly disavowed her Qanon roots in favor of a new hairstyle that no longer has that trailer-trash look.  Worry not, her new appearance belies the fact that she's still the hateful Margaret so many people detest.
And, in case you missed it, the fascists down in Brazil attempted their on January 6 event.  The major differences between Trump's fete du jour and theirs?  they chose coordinating colors, yellow and green, and whereas Trump sent his coup participants home with a blessing, over 400 were arrested down in Brazil.  And where was wannabe dictator Jair Bolsonaro while this was happening?  Why in Florida.  In fact, I do believe he's visiting that other wannabe dictator Donald, the Orange Anus, Trump.  How cozy.
The dysfunctional House of Representatives is set to vote on their rules and regulations today.  They need 218 votes to get them passed.  This is going to be interesting.  They can only lose 7 votes, I believe.  This is how you spell Deja Vu.
Finally, the State of Union is schedule for March 1.  I'm of the opinion the first (notice I say first, here) indictment will fall well before that date.  And the Moral Degenerate, Donald Trump, is not the only one who's going to be charged.  This is why Jimmy Jordan, and the rest of that group who wanted pardons, is desperate to set up a subcommittee to find out where all of the investigations stand, especially those regarding their own traitorous asses.