Well, it's Friday, I don't work, and my first load of laundry is in the washer: towels.  Outside, the sky is overcast and a breeze is rustling the branches of the river birch just outside my window.  The clouds are supposed to clear.  The temp is predicted to rise into the upper 40s (F).  Overall, this should be a good day.

Update on the treadmill.  The service tech I talked to on the phone asked if the speed gauge increased to 12 mph, and when I told her it did, she actually said "there's probably some sort of communication error."  She's sending me a new part.  What part, I don't really know. Parts are still under warranty, so it's free.  That's nice, though I have to admit I was not in the least bit impressed.  What if it's the wrong part?

Lisa Marie Presley died suddenly.  That's a shame.  In spite of her name, and her money, I don't think she had a very good life.  People expected her to be a singer, and she wasn't.  Her private life was  public fodder.  In most of the pictures of her being posted, she's not smiling, in many of them she looks like she's ready to punch you in the face.  I hope life is easier for her kids.

And, when I got home from work yesterday evening there was this big green dumpster sitting in front of my neighbor's house.  With her flashlight in hand, my neighbor from across the street was over picking through the trash.  She was surprised when I told her I wasn't over talking to the workmen, and seemed somewhat shocked when I told her I had absolutely no interest in anything that was in that house.  I've been in her house, it's a cluttered mess, and last night she was accumulating more garbage because it was free. 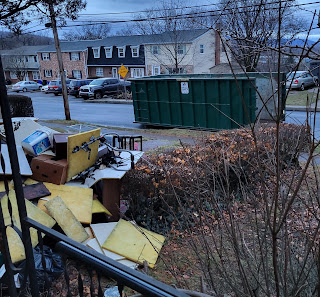 And what about those documents they found in Biden's garage?  Conspiracy theories are already shooting like lightening across social media.  One of the funniest claims these classified papers were planted in order to keep him running for re-election in 2024.  Others are shrieking about the speed in which Garland named a special counsel.  Kids, I hate to tell you, but this was probably done to placate the Republican whiners.  The special counsel takes away a very large chunk of red meat they desperately want to feed to their base.
And now for something funny.  One of the rules Kev McCarthy accepted, stipulates that any single member of the House can file to have him removed.  This includes both parties.  There are vicious little rumors spreading that the Democrats are going to do this... probably more than once.  Honestly, I don't think the small minded Republican majority even considered this.  I do believe they saw this as a tool they alone could use to manipulate Kevin.  If it wasn't before, I do suspect that very shortly Kev's life is going to turn into a living hell.