Looking out the window of my computer / workout room, I can see the sun reflecting off the Susquehanna River.  Yes, I am that close.  No more than 3/4 of a mile away.  Being on a high hill has its advantages.  I tell people that when I finally sell my house, it's going to happen in the winter, when I can see traffic moving down Front Street.  That's on the west shore.

All I did was work on the book yesterday.

Oh, and I took a ride in California through the redwood forests.  I'm so glad Tacx has started including rides in the United States.  Japanese rides are also now included in the package.  I did resubscribe for another year.

And I had mentioned before that I thought Biggie's potty breaks might not be as necessary as they seemed to be, well, I was right.  Instead of getting up every time he jumps off the bed to let him out, I've been letting him wander.  I don't think he's pleased that biscuits are no longer involved.  No more midnight snacks.  Sometimes he comes back on the bed, other times he doesn't.  Last night he slept for a couple hours in the computer / workout room.  Eventually, he moved downstairs to the sofa in the writing room.  He can sleep where ever he wants.

And then there's this: 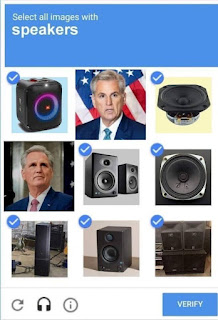 Can you hear me laughing now?
McCarthy keeps making concessions to the insurrectionists without understand that's not what they want.  The man's an idiot.  And a weasel.  And spineless.  I don't think he understands that one of the goals here is to humiliate him straight to Hell.
Yesterday, while Scott Perry was speaking, someone shouted "order for the traitor."  Had I been in a theater, I'd have been rolling in the aisles.  At one point afterwards, I believe, he was caught on camera yelling that this whole thing was bullshit.  As a reminder, Perry was the one pushing a YouTube video about Italian satellites switching votes from Trump to Biden.
Personally, I'm saying more power to these 20 asswipes.  I can't think of a better way to sabotage the 2024 elections.
John Boehner, who was forced out of the Speaker position by the American Freedom Caucus, has said they actually have no true agenda, their main goal is to 'kick as much sand as possible into the gears, hoping to break the government.'  That sounds about right.
No matter what they want, the destruction they're causing to the Republican party is tremendous, so, let's stand back and make a joyful noise!