Holy Crap!  It's Tuesday, and I slept in, and not because I stayed up late killing vampires in Evil West, or because I was watching TV.  I hit the sack around 11.  I only got up once to let Biggie out.  He did decide to sleep upstairs last night, just couldn't make up his mind if he wanted to sleep on the bed, or on the floor.  The floor won.

Outside, it's foggy as hell and rainy heavily.  This afternoon the forecast is for breezy conditions.  Hopefully, things will dry up.  Temps are supposed to peak in the mid 60s (F) sometime tonight, and the start to fall into a more winter like patter.

And yesterday at the store?  I was busy, busy, busy: over $7000 in sales; I cut blinds for several customers, and cut carpet as well.  My shift was pretty much non-stop customers.  That's fine.  Busy makes time fly.  I have no problem with that.  Of course, yesterday was a holiday for most people.

Before work, yesterday, I took a ride around Lake Annecy, which I do believe is in Treader's neck of the woods.  Actually, I had to ride 4 miles on a bike route next to a highway before I finally reached the Lake. 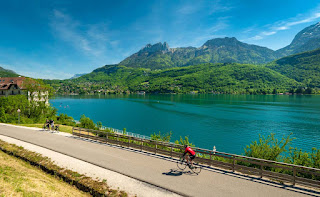 And, of course, today the Republicans take control of the House of Representatives by a very slim majority.  I laughed yesterday when I saw pictures of McCarthy's minions moving his desk into the Speaker's office.  And again, I chuckled this morning after I saw that it make take several days of voting before the Republicans manage to elect a Speaker.  During this time, the Democrats will wait, filing their nails, playing Wordle, and watching YouTube videos, as well as Unifying.  That's the important fact.  The Republican majority is so slim they will need Democrats to pass any sort of agenda.  The Republican party is in such disarray, they have no idea who deep a political recession they are in.
And, of course, there is the George Santos humiliation.  Brasil has reactivated the criminal complaint against him.  He is alleged to have written checks from a checkbook he stole, which is a crime in both Brazil and the United States, which means, should the Brazilian government ask him to be extradited, our government would comply.  Of course, this whole thing makes Republicans look terrible because they stayed silent; without his vote, their slim majority is even slimmer.
Oh, and indictments are coming.