Everybody's working for a rainy weekend!  Well... that might not be quite right.  I'm sure there are certain areas of the country where it is sunny and dry, but not here on the eastern seaboard.  And the rain is going to continue.

Lily went and did her morning business outside in steady rain and when I left her back in she ran straight to the chair with the towel.  She loves being dried off.  Truthfully, she doesn't care if she's wet or not, but being toweled is a lot of fun.  Biggie?  He's still being a slug-al-bed.  He lifted his head to look at me as I pulled open the curtains to let the dreary morning light creep into the bedroom, then gave me a snort, and laid his head back down.

So, I was putting together the bar cart for my laundry room yesterday afternoon and there was a disaster, one of the pre-formed, fake wood cross pieces used to hold the drawer split as I was screwing it to the left leg piece.  My most favorite words just burbled up quite naturally.  "Son of a bitch."  So I shot off an email to the seller, and they responded this morning.  They will be sending me a new part.  They asked for a picture, so I'm sending them this one. 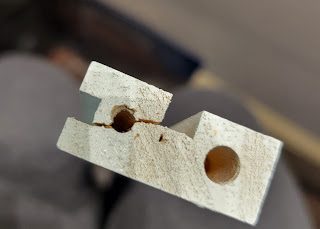 Yesterday was rather quiet politically speaking.  Though not really purely political, Alex Jones declared bankruptcy in an attempt to hold onto his millions.  Nobody thinks that's going to work, since his lies about the Sandy Hook shooting were intentional, used as a source of making money.  This scumbag can never pay enough for the evil he has wrought on suffering families just so he could make a buck.
South Carolina may become the first state that counts in the Democratic nomination process, followed by Nevada and New Hampshire.  Iowa Republicans are pissed.  Chaos, they shrieked, mostly because they have this desperate need to be first.  In their minds, that makes them special, and for them special is far more important than anything else.
And the closing arguments were held yesterday.  The prosecution was specifically detailed in mentioning that Donald J. Trump was not only aware of the tax fraud, but also sanctioned it. He is a greedy pig, you know.  Of course, the defense went completely bazonkers.  They fought long and hard to prove that he was not a greedy pig who had no problems breaking tax laws in order to appear wealthier than he really was.  This went on for fifteen years.  Sit back and think about that number. Then think about all of the money you have, as an individual, paid to the federal government in taxes.  All that time, Donnie was skipping around thinking his swindle was going to work, making him tax free.