It's a bright sunny Sunday outside.  Cold, the temps are not supposed to climb out of the 30s (F).  This morning, when downstairs to let out the dogs and start the brew the temp in the writing room was 69 (F) just before the heat kicked on.  Christmas is supposed to be bitterly cold, with highs in the mid 20s (F), so I'll probably kick the heat up a notch or two.

I don't doubt that this year it will be more expensive to heat my house since no one is living next door, and at this point, I don't imagine the new owner doing any work to get it ready for rental.  In fact, as far as I know, it is still overflowing with all of the crap the previous owner left behind.  Workers were stopped by yesterday to drop of boxes of vinyl plank flooring bought from my store.  The associate who sold it to them said the guy who bought it was a slum lord.  How well he manages the property will have a direct bearing on how many $$$ I put into my property.

We have a new store manager starting tomorrow.  This will be fun.  You see, 14.25 years ago, when she was only a supervisor, she offered me a part-time job as a cashier.  Then, when I moved into an HR position, I worked with her for 4 years at the Carlisle store.  I don't doubt for an instant she will be managing my store when I go into full retirement.  This is how circles work.

So, and what about Mike Lee?  Here he is cozying up to the Orange Anus. 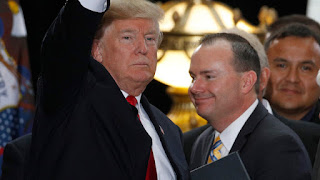 He has introduced a bill to ban pornography from the Internet.  Well, it's a little more than pornography he wants taken away, nudity in general is a bad thing.  You see, Mike Lee is one of those terrible individuals who believe a theology that was crimped together by men who not only believed the Earth was flat, but that it was the center of the universe as well.  For Mike to believe otherwise would mean he'd need to question.  Questions are bad for religion; answers not being might you want to hear.  Of course, Mike also knows that his beliefs are a great way to control the masses.  These rules have been divinely inspired, of course, they don't always apply to Mike, or to pastors, or to priests, or preachers.  And Mike? Because of his close affiliation with the Orange Anus during the insurrection, might find that he'll be spending some quality time in jail.  He will, of course, believe he is being punished for his beliefs.