I've a load of sweatpants in the washer..  I have been regularly checking the KW hours I use, and they are decidedly lower than in the past; thank you new dryer.  This month is still going to be pricey, mostly because P.P. & L. raised their rates.  According to the info they provide, the average family uses around 1000 KW hours per month.  Me?  I'm between 475 and 500.  I think my bill is expensive.  I can't imagine paying $1200 to $1400 a year for electricity, yet that's what the average family here in Central PA has to pay.

Biggie got up 3 times last night.  Twice he had to go potty outside.  When he's on his meds, that should stop.  Right now, he's sleeping on the sofa downstairs with a T-Rex, like a 2 year old with one of his toys.

Our dusting of snow is already beginning to melt.  This may just be a foreshadowing of what's coming our way on Thursday and Friday.  The Big storm moving across the country will be overhead by then.  I'm scheduled to work on Thursday, however if the roads are crappy I'll stay home.  Here's what the back yard looks like now. 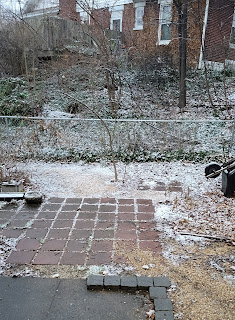 Like the snow, the fallout from Sinema's party switch is still falling.  While some Republicans cheered at the Democrat's loss, they were few and far between, had she chosen to caucus with them, that might be different.  Neither party wants to rely on a loose cannon to get their agenda either passed or blocked, especially since a small number of Republicans and Democrats have demonstrated a willingness to cross the aisle.  Compromise seems to be returning making Sinema's vote even more obsolete.
And now, a word about Aunt Vicky.  A Republican congresswoman who was primaried out in these past midterms, Vicky Hartler has made national headlines over her tearful plea to shut down the Marriage Equality Act.  Her gay nephew has publicly called her out; her office has no comment.  Her tears represent more than her homophobia, there's anger and terror in those tears.  Aunt Vicky, as are many intolerant Christians, is bitter because her strict religious beliefs are no longer being seen as an authority.  Christianity is, in fact slowly evolving.  This doesn't mean that Christianity is becoming kinder and gentler, just that the voice of one the most stringent apostles is being muted.