Well, it's Thursday, and I'm a little disappointed.  I work today, and for some reason I thought I had a short shift.  Well, wouldn't you know that while I was grabbing the milk from the fridge for my coffee, I glanced at my schedule (posted on the fridge door) and saw I'm at the store for a full, 8 hour shift.  Son of a bitch.  And here I had planned the entire day joyously running loads of laundry through my brand new washer and dryer.

They did arrive yesterday, in the rain, a bit earlier than I had expected.  There was supposed to be a call 1/2 hour before the delivery men / installers arrived.  That didn't happen.  They were here for about 50 minutes.  My ventless dryer kit arrived early, around 5:30 last evening.  I quickly attached that and ran my first load, towels, through washer and dryer.

The front load washer uses a lot less water than my old washer.  It spins in both directions, clockwise and counter clockwise, and a load of laundry takes longer.  The dryer, with the sensor-dry, takes less time.  I have not downloaded the Wi-Fi settings yet, maybe later, before I go to work.  Here's a pic.  The shelves on the back wall are still going to be used for storage; I'm keeping some of the walk-in closet's functionality. 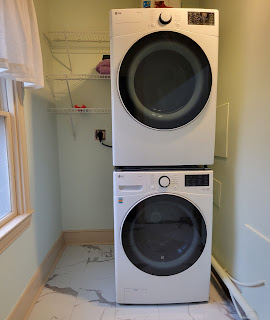 Yesterday, the Democrats quietly transition power to a younger generation.  This pleases me greatly.  Young and diverse, this is the future of America.  Say "hello" to Hakeem Jeffries, Kathrine Clark, and Pete Aguilar; not an old, white guy among them.
The taxes for the old Orange Anus arrived in Congress yesterday.  Will they be leaked.  I'd say there's a possibility, though not until after he's indicted.
And, speaking of indictments, I've been hearing a lot of hush hush regarding those members of the House who had requested pardons from Trump, the idea being that no one requests a pardon unless they did something wrong.  The word is that certain names, Perry, Gohmert, Biggs, Brooks and Green, are very big blips on the insurrectionist's radar.  Gaetz requested one, too, but his seems to have been more geared towards his sexual proclivities than anything else.  This is important because the Republican majority in the House of Representatives is, shall we say, rather tenuous.