So, wouldn't you know it?  I'm off for 2 days and the weather is crap, misty, drizzly, and the occasional heavy downpour.  We had fog warnings letting us know the fog was dense with poor visibility.  Today, I have to work, and the sun is out.  The temps are supposed to climb into the low 50s (F).  Not that I was planning a lot of yard work, other than the regular poop patrol, but I do tend to get more done on sunny days.

I did manage to bake 2 loaves of rye bread yesterday.  Tasty.  And I baked them the old fashioned way, kneading by hand, letting them rise, and baking them in the oven.  The bread machine is nice, but I'm sure the electric heating element suck down the KW.  Natural gas is cheaper for me than electricity and using the oven rather than the machine saved me almost 3/4 KW.  Now, that doesn't sound like much, but that adds up when you look at how much bread I bake.

Funny story about Biggie at the Vet:  I'm sitting alone in the examination room waiting for them to bring him back from his blood draw, when hear the assistant say, "oh, he just farted," followed by her making a disagreeable sound.  When she brought him back into the room, she told me he farted.  My response: "that's why I burn candles."  As my sister says, whether he wants to or not, Biggie has no problems clearing a room.

I'm wearing one of my paint shirts today.  Can anybody guess what I leaned against? 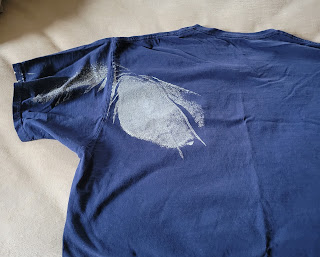 So, Britney Griner has been released from a Russian prison.  An exchange has been arranged.  Griner for a Russian bad guy who deals in arms dealer.  Call me cynical, but I'm betting he was the reason she was arrested in the first place.  Note to Americans, when working, or even just visiting a foreign country that has hostile ambitions towards the United States, don't do anything stupid.  Leave the hash, and the hash oil at home, unless being used by a dictator is on your Bingo card.
A few more documents have turned up at a storage unit rented by the Orange Anus.  I'm betting he has them tucked away in many, many hidey holes.
And finally, the fight to be Speaker of the House is going to get very messy.  McCarthy is promising heaven and earth to everybody and anybody in hopes of getting their votes.  Rep. Andy Biggs, he leads the American Freedom Caucus (which is bent upon an authoritarian government) also wants the position.  And then there are the Centrist Republicans who realize that either Biggs or McCarthy would lead the party into ruination.  For those who don't know, this is the Trump effect.  Destructive news to be updated regularly.