We Are Not Sheep

Well, it looks like we have an overcast, dizzily at times Saturday in store for us here in Central PA.  Nice, huh?

Today's going to meatless for me.  Veggies sauteed in olive oil are on the menu.  By veggies, I mean cabbage, tomatoes, green peppers, onions, and mushrooms... though the last is really a fungus.  So, I suppose, if I wanted to be precise, I should say it will be a veggie / fungi day.

I used the 'saw on a stick' yesterday.  It worked well.  I didn't get hit by any falling branches!  The 3 I cut down were cut up and put in large paper bags to be picked up as lawn waste.  The only problem with that is residents can only put our 4 bags at a time and pick up is only once a month.  I'm definitely going to have more than 4 bags when I'm finished. 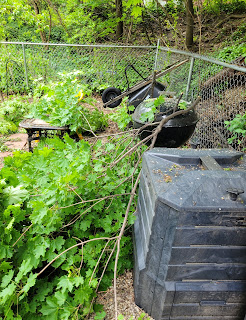 There are going to be many Pro-Choice demonstrations today across the country.  There is no doubt in my mind that turnout will be huge.  Not that it will change the Supreme Court ruling.  The fanatics running that show have already made up their minds.  the numbers today are not for them, rather they're meant to demonstrate to all the Republican legislators across the country that they are entering a no-win scenario.  The GOP still believes the economy will be the overriding factor in this November's midterms.  Of course, you have to remember, they are the party of greed.  Don't doubt for a second that their own polling proves their point, however, we all know how invalid polls can be, and Republicans have become very proficient at lying to pollsters.
Still, keep in mind that even when the turnout today is massive, those numbers will be ignored.  The GOP desperately wants a socially conservative, authoritarian government.  They will have no problem trying to shove their agenda down the throats of the majority.  They are going to learn we are not the sheep they believe us to be