Odd schedule today.  I don't have to be at work until 2:30 PM, and I only work for 4.5 hours.  Mondays are usually 8-hour days for me, not that I mind, there are always chores to be done.

I have ants in the kitchen, by the sink.  Fairly large ones.  Even though I hate to do it, I'll bring some ant spray or ant traps home from work, since the big ones can be destructive.

Enterprise Car Rental was also called.  They placed a $100 security deposit on my debit card for the car I rented while mine was being repaired.  My insurance company covers everything, so last Saturday I get a voice mail / text telling me they were processing a credit.  So far, no credit.

Also, my old X-6 Cannondale sold, and World Cup Ski and Cycling mailed me the check and... no check, and it was mailed on 5/8, and they're dawdling.  Hopefully the replacement check will be waiting to be picked up shortly.  I told them mail service here in Enola is screwed up.  Instead of delivering mail from our post office, everything comes out of the Camp Hill post office by part-timers who don't have fixed routes.  Centralization is evidently this is part of DeLoy's plan on making the postal service more profitable.  As a result, mail is frequently delivered to the wrong people, and quite often those 'wrong' people simply throw it into the trash.

I took a picture of me as a 'wretch' character I'm playing in Elden Ring.  Good news, I now have clothing, I just put it on until I level up, which will probably be sometime this evening or tomorrow.  Then I'll be snazzy. 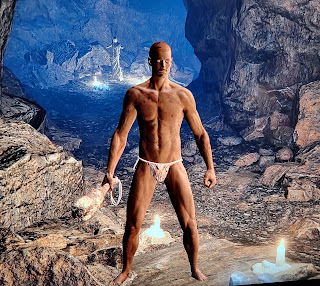 I saw this humorous article in The Guardian about Herschel Walker and which voters want to vote for him.  If you need a clue, think white people... white people who think black people will vote for him because he's black.  If you were to tell them their thoughts are systemic racism, they'd look at you dumbly.  Need I say anything more?  As for Herschel, it seems as though a lot of what he says simply isn't true.  He was never at the top of his graduating class in college.  Not only was he never at the top of his class, but he also never graduated.  Oops.  And, if he tries to hit you for a donation to a charity?  Watch it.  It seems as though as though the charities for which he gets paid to be a spokesperson aren't really charities.  Let's be honest here, I may be a nearly naked wretch (with a fab body) in Elden Fields, in the real-world Hershel Walker turns out be nothing more than one more duplicitous conservative wretch.