For some reason, I thought today was Thursday, and went into see if my schedule had been updated.  I was wrong.  We're only into Wednesday.  The updating will come sometime this afternoon.

Yesterday was a no-go as far as everything that had been expected.  Mike (the Plumber) showed up but had to take his truck in to get inspected.  He took pictures, and a video of the bad pipe, and gave me a quote.  Very high $$$, but I'm going with it.  This is the same reputable company I've been dealing with for some time, and I can afford it, however the truck inspection took longer than expected, so he'll be back this morning.

I did drive over to World Class Ski and Cycle to pick up the check for selling my X6 Cannondale.  The first check they'd sent me got lost in De Loy's screwed up postal service.  And then, of course, 19 days after the first check was mailed, the carrier dropped off the first check last evening.  A black sharpie had been used to scratch off the first delivery bar codes on the envelope, indicating the check had been delivered to the wrong address and that person had returned it to the Enola post office, which sent it back to the Camp Hill post office so it could be processed a 2nd time.  The bicycle shop put a stop payment on the first check and issued a 2nd.  This is almost the height of postal incompetence.

My roses are beginning to come in. 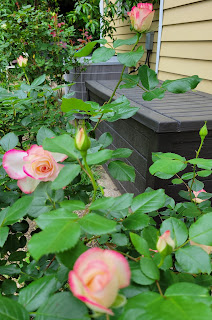 There was a terrible tragedy down in Texas yesterday.  Many children were shot to death.  Chris Murphy, the Democratic senator from Connecticut has said enough of the bullshit!  He is right on the money.  President Biden said, "we need to stand up to the gun lobby."  He is off.  It is not the gun lobby, rather it is the Republican party that needs to change.  They won't.  Any form of gun control would cause them to lose the votes of 2nd amendment assholes.  Lose votes?  Conservatives are so craven for power they will accept any form of gun violence.  They do claim to pray a lot, but I suspect those prayers are mostly hoping that the majority doesn't finally turn against them.  As expected, Ken Paxton, the corrupt Attorney General from Texas, and Ted (I would rather be in Cancun) Cruz suggested putting armed officers in schools.  I will tell you that from the deepest part of my heart, I do not believe our founding fathers envisioned the need to have armed officers in schools when they added the 2nd amendment to the Constitution.  Anyone who believes that is full of bullshit.