Well, workday Thursday has arrived.  Yep.  Because I'm available to work on Thursdays, I normally do.  No problem.  After today, my Friday and Saturday are free.  And the temps are going to be steaming.  The high today is supposed to reach the lower 80s (F).  After that, we're to be in the scorching 90s (F), and you can be my Central Air will be cranking.

Yesterday was another uneventful, unproductive day.  Last week was so good when it came to getting things done, so far, this week a lot less has been accomplished.  That leaves me Friday and Saturday to add a bit of a shine to a lusterless 7 days.

The new keyboard arrived yesterday and has now been set up.  This is how I set up the colors.  Most of it is a lime/green-yellow.  I avoided reds.  Even though I like red, I find that at times the color can be distracting. 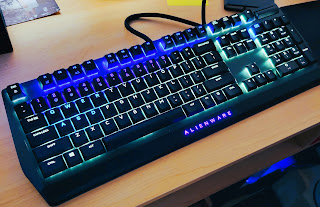 And in case anyone is wondering, they're still counting the votes from Tuesday's primary, and yes, the Republicans are going to be relying on the mail-in ballots.  The Orange Anus is shrieking for Oz to declare victory just in case MacCormick happens to 'find' enough ballots to make him the winner.  Now, ain't that funny? Oz is ignoring him, which is no doubt pissing him off.
One of the things I like to look at after a winner is declared, is the numbers.  Numbers say quite a lot.  Take the Mastriano winning the Republican nomination for Governor.  He desperately wants to be a Qanon King. (Big Laugh).  The GOP is not ecstatic. Nope. Not in the least.    So, what do the numbers say?  1.3 million Republicans voted on Tuesday.  Mastriano received 524,000 votes.  Almost 800,000 Republicans voted for someone else.  Now, that's an ouch from Hell.  I can also tell you that many of those voters who supported Doug, believe that every one of those 800,000, who voted for someone else, are going to throw their support behind Doug.  Well, that's not going to happen.  Mastriano is lost in Cracker Jack Crazy Land.  This is the reason so many Republicans are whispering that he is unelectable.  800,000 voters were not impressed with Trump's endorsement.  Many will either stay home come November rather than vote for Doug, and they sure as hell aren't voting for a Democrat.