Outside the sky is overcast.  I woke up to a 'weather warning' from Accuweather on my phone, possible areal flooding from thunderstorms this afternoon, not that I was planning on doing any real yardwork.  The elephant ear I planted has been nibbled on and will probably not survive.  I live in bunny hell, remember?

Just before I left work last evening, a couple came up and began sorting through the area rugs we keep on a very large table behind the flooring desk.  They ask the same questions everyone else asks:  what size are they? (They are all 5 x 7), do they come in larger and smaller sizes? (No), and will they be going on sale this weekend? (No, they never go on sale).  People believe everything goes on sale for Memorial Day weekend.  It doesn't.  One of my fellow associates told them this and their disappointment was obvious.  When someone asks me if we're running any specials, I say, "yeah, in appliances."

Besides laundry, a bit of work on the next book, and possibly a ride on the bike, there isn't a lot planned for today, so I thought I'd post a pic of the dogs. 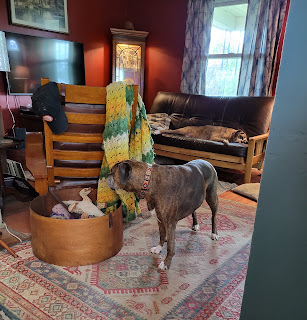 I saw Governor Abbott of Texas has chosen to cancel his speech at the NRA convention in Houston.  Instead of spending some quality time with his donors, he's going to put on his phony Debbie Downer face and visit the grieving town of Uvalde because voters are unhappy.  Beto made him look like dog shit.
Ted Cruz will still put in an appearance.  He knows which minority group butters his campaign bread.
So will the Spawn of Satan, Donald Trump.  No guns will be permitted on the premises while he's there.  He spoke at their last convention and the same rules applied.  I'm wondering if this year, besides outlawing guns, they also outlaw fruit.  I understand he now has a fear of pineapples.
My Newsweek feed sent me an opinion this morning on Herschel Walker's campaign.  The writer believes he has a good chance of winning.  I mused about that for a few moments.  This is a man who only speaks in coherent sentences when he's reading a teleprompter.  He will never debate.  And you can bet he will only take questions from his friends at Fox News.  Rather than respond personally to issues, Walker will let someone from his campaign speak for him. Warnock is going to play hardball, and that's the wrong sport for an aging Walker.