After a number of days of being very productive, I have to admit that yesterday was not.  There were a number of things on my agenda, but few were completed.  Mostly, I blame the candy.  I never buy candy, however yesterday morning, while at the store, I picked up 2 bags to take to the store.  Big mistake.  I was fine for about hour after getting home, but then temptation reared its ugly head and I ripped open the bag of Payday candy bars.  It was all downhill from there.  I ended up chowing down on candy bars, watching the news, and taking naps. I have not stepped on the scale this morning as I am certain it will break.

I did discover what's wrong with my nectarine tree.  I have leaf curl. And it's not only on my nectarine tree, my peach tree is infected, too.  Leaf curl is a fungus.  Normally, it's dormant until you have long, drizzly days when the rain lasts for more than 10 hours.  Well, we've had that.  We had that last year, as well.  The only treatment is a copper spray which needs to be applied in late winter, before spring rains arrive.  Well...it's a bit too late for that one.  I did mark my calendar to buy some in late February. 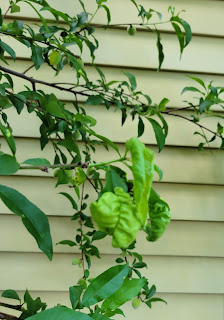 And, of course, a number of states held their primaries.  A lot of people are cheering that Madison Cawthorn lost is primary.  Me?  I'm thinking maybe he should have squeaked out victory and then let a Democrat take him out in the General Election.  Now the Democrats of North Carolina will have to deal with a candidate who comes across as more normal.
In Pennsylvania?  We have big John Fetterman as the Democratic candidate to replace Pat Twomey.  The Republicans race is too close to call, and there is a good possibility it may force a recount, which is never good for a candidate since breeds hostility.  Barnette, who lost, has already told the press she will not support another candidate, so the bloodletting continues.  This is what happens when you build a party of selfish individuals who refuse to compromise.
For Governor, the Democrats have Shapiro, who has handily won every campaign he has waged.  He'll be running against the Cracker Jack Crazy Doug Mastriano.  Doug is a radical MAGA, to say the least.  He was in Washington on January 6 and has pushed The Big Lie extensively.  Many in the GOP are of the opinion is too much of an extremist to win.  An example:  Last evening he claimed that Jesus was behind his victory.  No separation of Church and State in his playbook.