The Truth is in the Babies

Another work week begins.  Yaaaay, and for me this is going to be an 8-hour workday.  But that's okay, I am off for the next 2 days.  Temps are forecasted to be in the upper 60s (F), which is fine with me.  There is one day when they drop down into the 50s (F), but after that they are predicting daytime highs in the mid-70s.

Yesterday was issue day at work because it was the end of the fiscal quarter.  When sales are up, as has been the case for the past 2 years, there is no promotion, no incentive, for people to purchase a flooring installation.  This year revenue is down, so there was a 10% discount on flooring installations over a certain amount.  This brought out several very frugal customers... and every one of them had issues that couldn't be resolved on a Sunday.  One customer, who was measured back in February, purchased the wrong flooring to get that discount, his plan?  To cancel that order and replaced with a cheaper product once he decides which product to use.  He has 3 days to cancel and still get the discount.  After he and his wife left, we looked at each other and laughed, one of us muttering "well, this is going to be a real cluster fuck."

I saw this on Marc's blog and had to copy it. 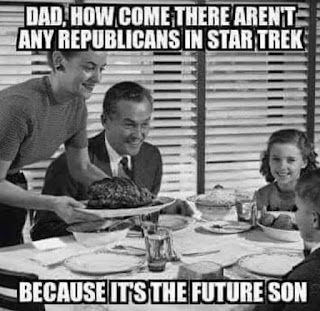 I don't know if everybody will understand how pertinent that meme is but believe me it says a lot about science vs religion.  One of the 'end-of-time' religions has done a lot for science: astronomy, mathematics, health services (they developed triage).  The other?  Well, that one hates science.  One of these 2 religions has had a messiah, which set their timer ticking, the other has had a prophet, leaving room for possibly another prophet... or two, before their messiah arrives.  One of them needs to keep its disciples primitive, eliminating education which enlightens, the other is slowly evolving.   Both of them like to dictate the lives of their followers, however one is slowly moving forward, the other requires thinking from an earlier time.  Interestingly enough, the one that is slowly moving forward is also making lots of babies, the other one?  The one that desperately wants to be stuck in the past?  Well, that one isn't making a lot of babies.  i wonder sometimes if this might be their Judgement.
Anyway, I see that another Republican governor is on the verge of throwing his hat in the presidential ring, some guy named Asa Hutchinson from one of those red states to the south.  This will be interesting.  Also, I get a feed from Newsweek, which is conservative, meaning it lacks centrist honesty, and they published an opinion yesterday stating DeSantis was going to win by a landslide.  I'm still laughing at that one.