So, here it is, Saturday.  For us, here in Central PA, the cyclone bomb was a bust, barely a dusting, though we do have wind the the temperatures have dropped.  Today's high is expected to be around 23 (F).  That's cold.

I am sitting in my new desk chair as I write this.  Clipping my nails.  I'm just about finished, all I need now is to soften the edges with an emery board.  You know what I'm talking about, those cardboard nail files.  Interesting note, I need to keep them up on a shelf.  If Biggie gets a hold of one, he'll eat it.  What can I say.  He will also eat paper towels and tissues, given the chance.

Here's a pic of the new chair, manufactured by Steelcase.  Tres comfy.  Interesting point:  one of the reviewers gave it 2 stars claiming it was difficult to assemble.  That person must not be very mechanically inclined.  The chair was pretty much assembled upon arrival.  Nothing had to be bolted or screwed together.  It took all of... maybe, 2 minutes. 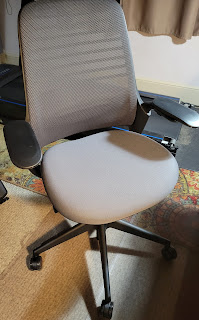 For those who didn't hear, a court struck down Pennsylvania's mail-in voting yesterday.  It's a Republican judge, in case you hadn't guessed, and the suit against the law was pursued by Republicans For the Big Lie.  As you might expect, the Orange Anus cheered.  The ruling says the state constitution needs to be amended to provide for mail-in voting which will never happen because Republicans have a majority in the state legislature.  Honestly, I've never seen such a level of stupidity.  You see, if you're in the military and stationed anywhere else in the world, you can no longer vote by mail.  That's right.  You need to use leave time and fly home to Pennsylvania just to vote on election day.  Of course, by the same token, if you're a Republican living in The Villages who also maintains a house up here in Pennsylvania, you can no longer vote twice... because that is the only voter fraud they've discovered.  Oh, and in case you are wondering, appeals are underway.