The Wheels of Justice

Well, it's Monday morning, it's 17 (F) outside, and I have to work  in the paint department on what had originally been scheduled as a day off.   Being part-time is nice, however, if I hadn't been a paint manager for 4 years they would never have asked me to work.

My air-fryer arrived yesterday.  So far, it's been through the test run, nothing has been cooked yet.  There's a preset for shrimp, that will probably never be used, I like my shrimp steamed with port wine and Old Bay seasoning.  Using port makes it easy to flambé  the little suckers.  Very tasty, let me tell you.

I had thought I'd drive down to That Fish Place to pick up some plants for the aquarium this afternoon, now that's not going to happen.  Maybe tomorrow morning.

And, since The Body in Repose is with my first reader / editor, I've begun to doodle around.  Here are the characters for The Body Under Ice.  The victim is pretty obvious, but which one of them is the killer is anybody's guess.   Well, that's not quite right.  I know who kills Charlie Beechum. 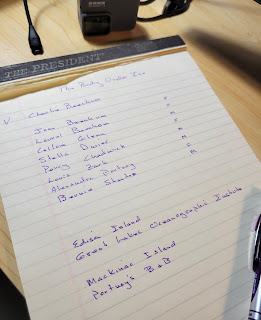 As for The Body in Repose, I asked how the reading was going... in fact, I had to ask twice, and received this 2 word response.  Really good.
Oh, and the Orange Anus gave a speech down in Texas during which he talked about his pending lawsuits.  Well, he didn't really talk about them, just asked his followers for there to be protests if he was 'illegally' charged.  Big Protests, like the one from January 6.  Basically, he just threatened the prosecutors.  This is the sort of thing you'd expect from a criminal, wannabe dictator who feels the wheels of justice are coming to roll over his ugly orange ass.  This man doesn't care how many might die to save his ego.  Remember, in his mind, nothing demonstrates loyalty more than sacrifice.