Hello Friday!  I'm almost always happy on Friday.  I'm unavailable to work any Fridays, so this will always be one of my days off.  I am scheduled to work tomorrow, and Sunday, and Monday, but... there's a snowstorm expected to roll into town sometime late Sunday afternoon.  People at work were pissing and moaning about it yesterday, not that we're supposed to get snow, rather they were all 'het' up because 'total accumulations' were changing.  We were 4 days out and they wanted to know how much snow we were going to be getting.  Damn!

My cover artist and her husband have Covid, just sent her a text to check in on them.  At work, we now have 3 people on their 2nd go round because getting it once doesn't mean your done.   Sly little virus, ain't it?  One of the associates who was in the ICU came back yesterday, quite a few pounds lighter and no longer on oxygen.  He was one of those who kept claiming it was no worse than the flu.

I took this pic of the dogs on their sofa (operative words being 'their sofa') last evening while I was working on the rewrite.  You can see the ugly shade I bought to keep direct sunlight from hitting the aquarium.  Biggie had a bit of a fall on the kitchen floor a little earlier.  In case you didn't know, bounding big dogs don't bounce, their feet slide out from under them.  Even though he was fine, he still felt he needed to be medicated with a few biscuits. 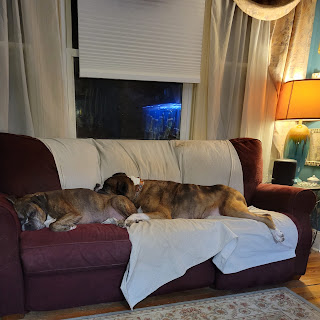 As you all know, the Supreme Court shot down the vaccine / mask mandate yesterday.  No one should have been surprised.  The Conservatives got their way.  I have no problem with that,  On a good day about 1200 unvaxed conservative voters die from Covid, on a bad day for them even more die.  This doesn't mean you can get out your party hats and noisemakers, but make sure you know where they are.
Oh, and eleven Oath Keepers were arrested for sedition yesterday.  One of those taken into custody was Stewart Rhodes, their big gonzo.  Against his lawyer's advice, he had been talking to the January 6 committee.  Some sort of plea deal wouldn't surprise me.  I just wondering how many will agree to turn state's witness and offer to testify against sitting members of congress.