Lily's eye is improving.  Her nictitating membrane is only covering the inner corner of her eye, and depending upon what she's looking at will disappear completely.  The swelling has also started to go down.   This is a good thing since she is not a 'vet friendly' dog, not that she's mean, though she's very picky about who is around me.  She loves my friend Justin, but will bark at my neighbor until he leaves.  Right now, she and Biggie are sleeping in on the bed.

I did bake spice cookies yesterday, though I didn't quite follow the recipe.  They're supposed to be small, around an inch in diameter.  I like my cookies large, so mine are almost 4 times the size.  Believe me, they are tasty! 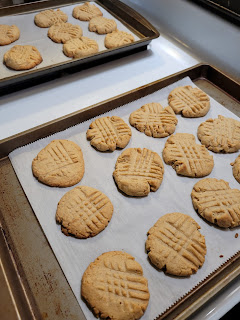 And, of course, today is the anniversary of the Republican's attempt to overthrow Democracy.  We should have expected their attempted coup.  They've been becoming more desperate ever since Reagan's re-election.  They went through their T-Party stage, where they felt they alone could define Democracy.  With Obama, they became the obstructionists known as the Do Nothing Party, refusing to compromise.  At that point, we should have realized how much they desperately wanted an Authoritarian Government they, themselves could run.  Then, because too many Democrats stayed home thinking Hillary had it in the bag, they pulled off an Electoral College win that put a wannabe dictator in the White House.  He obligingly gave them everything they'd ever dreamt of, except a 2nd term.  And they were angry.  They were going to steal back the election.  Not only did they fail, their failure was televised around the world.  We have only just begun to put them down.  Keeping them out of office is our job.  Vote blue.  Be a true American and vote them into obscurity.