Guten Morgen.  That's right, I'm working on my German again.  Every day.  This is my 2nd attempt, so I'm interested in seeing how I'm going to fare.

I did order a new desk chair.  I couldn't get the pipe clamps to fit tightly to keep the seat from deflating, and deflating is the correct word.  Looking back at the reviews of this chair, this issue appears to become quite common as it gets older.  For what I initially paid, I did think it would last longer than 3 years.

So, what's in store for today?  Possibly and load or two of laundry.  Maybe some blueberry muffins.  Now, doesn't that sound tasty?  Freshly baked, and with more than a smidgen of butter, on a cold wintery day?

And, of course, later a ride on the bike.  Tacx has popped in a number of new rides.  Nothing with too many hills, though, Max Sullivan is the only one I know who has legs of steel for climbing and he's fictional.  Will there be a demonstration of his prowess in The Body in Repose?  Hhhhmmm, that's possible, even in the French Quarter.

And I saw that a cyclonic bomb is suppose to roar up the eastern seaboard later this week or this weekend.  Here in Central PA we're going to miss out on the snow. 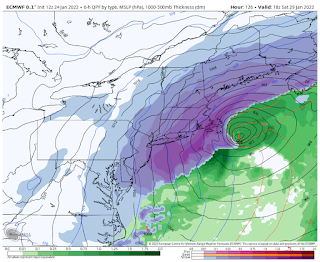 Here's an interesting little stat:  currently in the US around 2300 people are dying of Covid everyday, the vast majority being unvaccinated.  This means that by the time the election arrives in November, the Republican party will have lost about 490,000 votes, give or take a few thousand.  Hey!  More power to them!
And what about DeSantis in Florida?  All these new laws he pushing for?  He desperately wants to make himself a dictator governor.  There are quite a number of aging Republicans living in The Villages, enough voters to swing the vote.  He's appealing to them, to their need to look at those around them and say "shut up!  we're in charge!"  He's gambling that, come election time, there are still enough of them left alive to still swing the vote.  He is going to go down in history as the worst governor the state has ever had.