The Weekend will end tonight!  At midnight!  That was for all of you who weren't sure because there is this storm moving up the east coast.  Well, not exactly, and only kind of bring snow and freezing rain up into Central PA.  States to the south are going to get hit and some of them don't do well with snow and ice.  Right now our forecasters are saying we might get between 1 and 3 inches of mixed precipitation.  I told you that's what we were going to end up getting.  Just when will we get this snowy, icy, freezing rain Slurpee?  Well, they're not even sure on that, so let's just say the slop should start falling between 1300 and 1800.

On the interesting side of things, while I was poring over maps of Mackinac Island, I discovered a small islet to the the northeast called Edison Island.  The small environmental research station run by the Navy was shut down several years ago leaving nature to slowly reclaim the buildings.  Personally, I think this makes for a really great setting for The Body Under Ice.

Oh, and in case you didn't hear, Novak Djokovic lost his bid to stay in Australia.  😁  Boy, I'll bet he's pouting like hell.  Back when I was in the Navy, we were always being told that when you're in a foreign country, you follow their rules.  Rather than do that, Djokovic lied, for a while he almost got away with it, but then he compounded his insult to Australia by telling people he tested positive for Covid and chose not to quarantine.  He went places because he's a famous tennis player. Now he's going home.

And will Putin invade the Ukraine?  Of course.  He has this little boner which is telling him to take Russia back to the time of the Czars.  Like a lot of little boners, his will screw him over.  There will end up being a bloody insurgency, and shortly after that starts, Kazakhstan's going to begin biting his ass again.  With insurgencies raging on both ends of the country, the Russian people are going to start stomping their feet shouting "Putey baby, put your little boner back in your pants," but by then it will be too late for him.

And, finally, the biggest loser in America, the greatest liar to make an appearance of the soon the soon to be defunct OANN (Cracker Jack Crazy Cable News Network), Donald Trump was in Arizona yesterday.  That's right, he held a rally for The Big Lie and a lot of crazies were in attendance.  Since this loser can't do anything else but lie, he... well, lied.  Surprisingly, he didn't get a lot of press coverage because, well, his lies are old.  He, and his party, are rapidly becoming a broken record.  This is how the the Republican Party dies, not with a bang, but with whimpering lie. 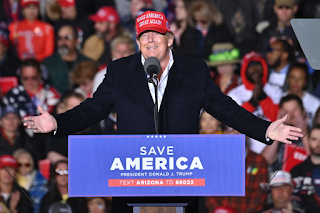