On the Bright Side

Okay, so it's New Year's Eve.  Can you feel the electrified excitement flowing through my fingers as I type?  You can't?  Golly Gee!  I wonder why that is.  Could it be that I learned a long, long time ago that nothing's going to change at midnight?  Probably.  There's also the possibility that I realized, again, a long, long time ago, that New Year's Eve was just an excuse to party hearty.  That is the excuse most people rely upon.  And it's already started - I received a notification a short time ago that New Zealand is the first country to celebrate the new year.  Excuse me, but what's to celebrate?  While some countries might be a little better than they were last year this time, there are also some countries which aren't, some are even worse.

Of course, in America, Conservatives refusing to get vaccinated will end up getting Covid over and over again until it finally kills them.  I guess that could be considered a bright spot.  I tell those who believe the nutso jobs on The Daily Wire when they say there's no concrete proof you can catch Covid more than once that they need to come work in my store.  A number of people have already had it twice.

On the bright side, I am off today.  I do work tomorrow, but I get holiday pay, and they're bringing in food for us.  Now, ain't that a jolly treat.  Business will be slow, except for the duffers who think we're going to be running New Year's Day sales.  That'll never happen.

Other Bright Spots?  My back is feeling great.  The dogs are healthy.  The fish tank is evolving into something old (photos when I get the live plants).  Oh, and I'm thinking of baking chewy, spice cookies today. 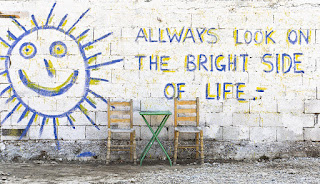 Another bit of Bright Side news is that Ron DeSantis appears to have disappeared.  Family vacation in Cancun?  I think they're saying it's been about 2 weeks since he's made a public appearance.  His spox (that's short for Spokesperson, though let's be honest, it sounds a lot like something Republicans spread among themselves), said that his wife is  battling breast cancer, and he is raising 3 children.  We know some of that to be true.  Still, with Covid raging across the state, you would expect Ronnie to make an appearance... oh, wait, I forgot, he really doesn't care if people are dying across his state.  So, my money says he has taken the family on a vacation... maybe to Mar a Lago.