Well, I have to say my appointment with the UPMC pain management doctor was pretty much of a bust.  I had to wait 40 minutes for him to show up, (I really hate to wait) and when he did there was no 'how are you? where does it hurt? what makes it hurt?'  Nope.  The first thing out of his mouth was "epidurals work for most people."  He almost allowed me to explain what I have been doing to help with the pain before repeating the bit about the epidurals.  Other forms of pain management never entered the conversation.  The appointment taught me quite a lot about how he practices medicine, as well as most of the patients he sees.  I'm supposed to have a follow up 'video' appointment which I will cancel, no use wasting the governments money on this yoyo's horseshit.

On the much brighter side, I went to see  West Side Story last evening.  The movie was very good.  Back when I was in college I had the pleasure of directing the Phi Mu Alpha production, so I'm quite familiar with the show.  This adaption works quite well.  I'm not a big fan of Ansel Elgort, but he hits all the high notes and the part of Tony can be an average tenor's nightmare.  In the original movie version, the song "Cool" was moved to after the rumble.  Singing a song about staying "Cool" after 2 murders just didn't work for me.  In the Spielberg version, as in the show, the song now proceeds the fight and works much better. 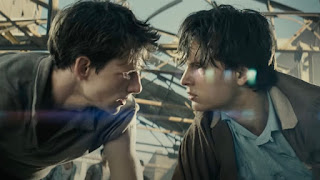 My opinion on why it didn't tear up the box office its opening weekend:  Not everybody wants to go see a movie with a sad ending after living through 2 years of a pandemic.  There was also the Kentucky tornado tragedy filling the airwaves.  I do think those had a big effect on the box office.  That being said, sitting in the audience last night, attendance was high, between 40 and 50 for a Tuesday night showing.  My friend turned to me and said, "Dave, there's a whole shit load of people here."  Honestly, I suspect this movie is going to have very long legs.

And, of course, the House of Representatives has found Mark Meadows in Contempt.  I don't know which is getting more press, that little tidbit, or Liz Cheney's reading of desperate texts from January 6.  There are some who are upset that this information isn't being released fast enough, let me remind them that timing is everything.  Some... well, let me rephrase that, quite a few Americans have long term memory issues: they can't remember in November what they heard and read a year earlier.  A big info drop might end up being useless.  Besides, isn't it fun to slowly add salt to the Republican wound?