And the weekend has started for some of you.  Weekends are when I work.  We are approaching the slow times of the year, so by the middle of December I'll just be putting in time to get a paycheck.  My hours will go down, but that's okay.  I'm sure some of you know what I mean.

Yesterday I had my car inspected.  $158.  That's terrible for a brand new car which has no problems.  $80  of that was for the oil change.  Me thinks I'm going to need to start going to one of those places that changes your oil for $35 in order to save me some bucks.

I did chat with the NYT yesterday about cancelling my subscription.  Previous experience has taught me to always chat, never talk on the phone since you're always connected to a high powered sales shark.  As some of you might suspect, I didn't cancel, however my subscription rates have changed... dramatically.  I will pay 50 cents a week for the next 52 weeks, and then my rate will go up to $2 per week... for eternity, or as long as I decide to subscribe.  That's a big drop from $18 per week.  It's digital, believe me, they can afford it.

In my book The Body in the Tower, something happens in what I call the Greek statue garden of the Louvre.  The museum calls the space something else, however for my purposes I redubbed it the Greek Statue Garden.  Since not everyone has been to the Louvre, this is what I was talking about.  It probably doesn't look the same today, since I took this about 12 years ago. 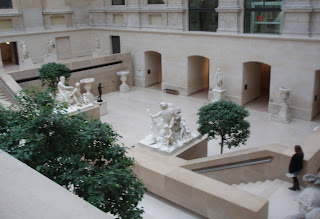 I saw where they arrested the parents of Ethan Crumbley.  Good.  For those who haven't realized it yet, they are MAGA breeders, a none thinking couple who have never quite made it into reality.  The only thing missing from the photo of their front porch was the Trump sign.  They were not too shy about posting their opinions on social media, because of that we have a long MAGA history to look draw from.  One of my favorites was from a letter the mother sent to Trump in which she said, "I'm tired of being fucked in the ass, I would rather be grabbed by the pussy."  Because of their stupidity, their lives are now over, since, they somehow avoid being incarcerated, they will face years, and years, and years of civil lawsuits.  Sadly, we all know they will never pay enough.