I got my haircut yesterday.  Different barber than last time, so there was no heart to heart with the gent who had been in jail several times.  This time a woman cut my hair.  When she found out I worked for the great Orange Box retailer, she launched into a tale of how her mobile home had caught fire:  her kitchen burned.  I smiled to myself as she told me she went to our store in Shippensburg (we don't have a store even close to Shippensburg), and how the employees permitted her use their discount to buy her appliances (we don't get an employee discount).  Thankfully, she was fast with the clippers which cut her story short.

While I was sitting at my desk yesterday, this little lady came up and sat down beside me.  My, isn't her muzzle getting gray?  And her nose is in need of moisturizing nose butter. Both she and Biggie had dry skin and so need to have 'treatments,' always with a biscuit or two. 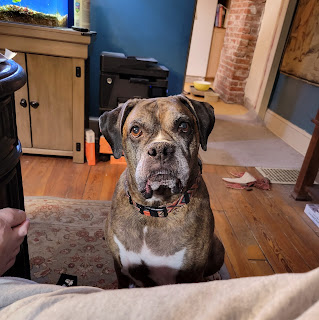 For those of you who haven't been following the on again, off again relationship between Mark Meadows and the the January 6 committee, it's off... again.  Maybe.  Kind of.  Apparently, after they had officially broken off talks, Meadows handed over a 38 page Power Point Presentation describing in detail how they could overturn the election.  This document was circulated among the privileged Republicans fully supporting Trump.  And now everybody's talking about what's in the details.  In fact, one speculator went so far as to ask why Meadows would turn over something so incriminating.  Personally, I'm thinking that behind the scenes his team is working with the committee to work out a plea deal where he's going to turn State's Witness.  We should start preparing for the naming of names, I think.

This is an interesting complication for the Evangelicals.