Build Back... what the hell?

Well, my alarm went off at 0500 this morning and I rolled over and shut it off.  Biggie had me up twice during the night to go potty outside, so a little lay-in was acceptable.

Yesterday was a good day down in York with my friend Betsy.  Funny thing though, I got a call and a text from the store asking me if I wanted to work a couple of hours.  The answer was, as you might expect, no.  This scheduler has been doing this job for 2 years and still doesn't understand she needs to schedule for coverage, not hours.

Also, my Epson printer stopped printing in color right in the middle of a picture of the rooftops of the the French Quarter.  I was not very happy.  The regular printer head cleaning wasn't working, so I had to do a power clean.  I hope this isn't going to be an ongoing problem.  It's less than a year old.

I took this picture of the moon yesterday afternoon when I got home from York, almost looks like the sun, doesn't it? 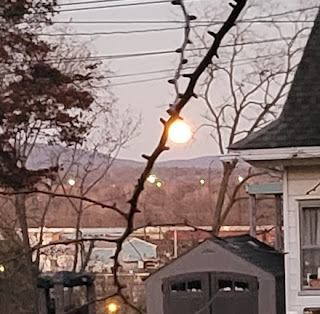 And, of course, Manchin ignorantly knifed the Build Back Better plan in the back yesterday.  One of the bits I read said he had never been fully on board.  This is not me defending him.  If that's the case he should have been far more vocal.  Instead it appears he teased his vote for the legislation.  I understand he's a moderate Democrat from a Conservative state, however I doubt very much if his antics are going to win him any votes back home... except maybe Republican votes.  And, of course, he does like the pleasure of the Corporate company he keeps, thanks to them and his business dealings he's managed to buy a Maserati.