Well, yesterday was warm and then last evening storms moved through the area cooling things off.  We have had a lot of rain this year, more so then usual.  We will have to see what happens as we approach July, then the weather usually gets hot and dry.  I saw that California's suffering through high temps again; that will move east.

I drove down to That Fish Place, which has had a name change to That Pet Place, yesterday.  Nice drive.  The weather was nice, and there wasn't a lot of traffic on the road.  Five little Tiger Barbs have moved into the big tank, and in the little tank in the living room, where I put the 'bad' algae eater, two Goldies have taken up residence. 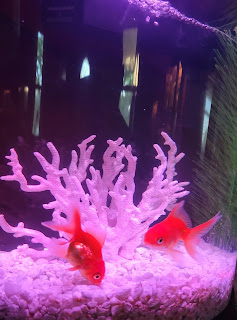 The little tank is bowed and everything looks odd, so I'm thinking of replacing it with a regular, rectangular glass tank.
And I woke up this morning to the smell of baking bread.  I love the timer on my bread machine, just toss in the ingredients and set it to start the baking process around 0200.  Every thing is ducky dandy.  This afternoon I'm going to bake a loaf of raisin bread.  Yum.  I haven't had raisin bread in years!
I saw where the Heretic, Marjorie Taylor Greene went to the Holocaust Museum and apologized for comparing masks to yellow stars.  She is, however, not going to stop comparing Democrats to Nazis.  Someone needs to tell her that's an automatic fail, not that she'll listen.  Her ears are too stoppered up with selfishness and self-entitlement for her to hear anything.
And in case there were any doubts, there shouldn't have been, Mitch the bitch McConnell has now confirmed that Republican Senators will once again be known as The Party of No.  You see, old Mitch believes his party are going to retake both the House and the Senate because... well, traditionally this has always happened after a national election.  The losing party almost always benefits.  However, this time the losing party supported an insurrection.  The losing party publicly accepted the Big Lie.  2022 is not going to be a traditional election.  By the time it's over, I do not doubt there will be drool dribbling of Mitch McConnell's not existent chin.