So, Day 1 of my Staycation was fine.  I had lunch with my friend Betsy, teased her with the first chapter of The Body in the Loch, and ended the visit with a trip to Dairy Queen where I had a large Drumstick Blizzard.  As I commented to Bathwater on 6/8 I love Blizzards.

The rest of the evening was spent in relaxation, not doing anything... well, that's not quite true, I did run the dishwasher, but that isn't really work.

I packed away the medical thermometer given to my by my employer, the large Orange Home Improvement retailer.  Hopefully, I will never have to use the damn thing on a daily basis ever again.  Unfortunately, I still need to complete the Associate Health Check before the time clock will let me punch in; I can't wait for that to disappear as well.

Here are some of the character names from The Body in Repose:  Cookie Lindquist, Raj Beneh, Sheila Caine, and Antoine DeGuerre.  Character names are very important.  It's not unusual for me to spend several weeks choosing them.  I guess, in a way, it's a lot like naming your children, which is odd, since why would you want to give a good name to a character you know is going to be bad?

The harvest has begun on my peaches.  Some of them are fairly sizeable, some not so, being the size of walnuts. 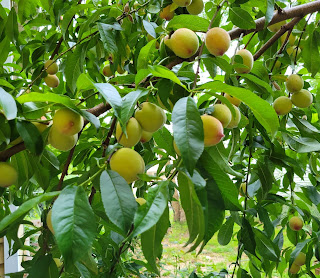 Oh, and it case any of you didn't know, Bibi Netanyahu got his ass fired.  I saw where he's spitting his own version of The Big Lie.  Not only is he a corrupt politician, he's a bad loser, almost as bad as the Orange Anus.  And I saw where Putin defended Russia's action against his political rivals by calling them dissenters and claiming we did the same thing...  you have to remember, he's talking specifically about the Republican party, and even more specifically the Orange Anus.  He's going to create a Civil War in Russia... and he's going to lose.  I will harvest peaches and he will harvest failure.