Well, after 4 days, I have a day off.  Many things are planned, mostly household recreational activities.  Doesn't that sound nice?  Household Recreational Activities.  Rather then say that I've a lot of chores needing to be accomplished, I just say I'm going to be spending a few hours with that good, old-fashioned HRA.  As long as I don't provide details, no one is ever going to know, will they?

Every year around this time Strava usually hosts a Trek Challenge: ride at least 100 miles in 30 days.  Not this year.  I suspect Trek bowed out.  This year you can create your own challenge, cycling, running, climbing... you name it.  You can design a group challenge, or an individual one specifically for yourself.  The only goal I have is to ride, stacking up both hours and miles on the bike.

There's also a Zoom call scheduled for this afternoon with some of my Navy buddies.  I'm participating downstairs this time.  On the last call, I had to keep letting the dogs out and then back in multiple times.  If that happens today, I hopefully won't spend as much time at the back door.  Of course, it's supposed to be stanky hot so they might just sleep through the afternoon.

When your town makes it into Joemygod, it isn't always a good thing.  Mechanicsburg was in one of the headlines.  Some stupid MAGA named Sandy Pomeroy Weyer got her ass arrested for participating in the attempted coup on January 6.  She's kind of skaggy looking, don't you think.  Here's the link if you want to read about it.  This is the face of selfishness, and the look of hatred.  She bragged about not being afraid of the police, and then her Facebook posts began disappearing meaning in the real world she's a spineless sack of shit. 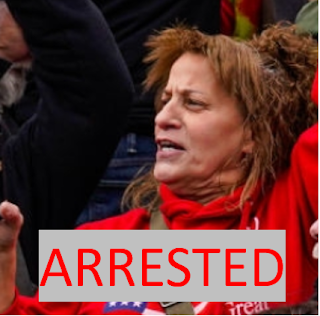 In an interview published by the Atlantic, Billy Barr said the claims of voter fraud are nothing but Bullshit.  Those with half a brain, or more, have known this from the beginning.  The only reason grasping The Big Lie is that without it, they are lost.  They see it as a life preserver.  In reality, it's a rock that will drag them down.  Thank you gravity for giving that rock momentum.