Holy Crap!  I get to go back to work today!  In case you haven't realized it, there's faux excitement in my words.  You know? Me?  Work?  Any sort of joy whatsoever?   Ah, I'll be honest, it's not quite that bad.  I'm not going to really mind working for the next 4 days.  In fact, the only thing I find disconcerting at all is the steady rise in temps.  Tuesday, my next day off, the temps are supposed to crest at a toasty 96 (F).  That's warm... really warm.

One of the things I accomplished on my 2 days off was getting all four book covers mounted in the hallway.  Each one is an original work of art.  I tried to order the same frames for all of them, but things didn't quite turn out as planned, so from now on I suppose they will all be different. 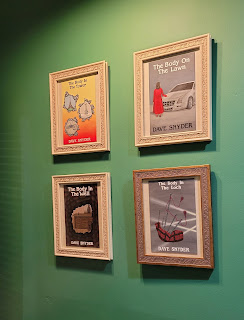 I went to see "Hitman's Wife's Bodyguard" last evening.  I had a fun sans mask.  Almost like old times, except the kids at the concession stand were wearing masks.  Not vaccinated.  The movie was very funny at times.  Lots of action.  Ryan Reynolds has become quite the safe actor, being reliably funny or serious as the need arises.  There were 2 surprising bits of casting:  Tom Hopper, from The Umbrella Academy playing a rival bodyguard, and Morgan Freeman playing Ryan Reynolds' father... don't ask.
For those who didn't see it, Republican Governor of West Virginia, Jim Justice (okay, you can stop laughing at his name) said that if you're not vaccinated, you're entering a death drawing.  He said he doesn't want the wheel of death to stop at his name, though if you ask me, that would indeed be justice, his being a Republican.
And rumors are spreading as to which one of Trump's closest minions is going to be thrown under the bus first.  I understand odds are growing it's going to be Jared since isn't really genetically related.  There have been rumors that Jared and Ivanka Danka have been trying to put some distance between themselves and Loser #45.  Which might make sense, since the failed will always place blame on someone else.  Of course, there are also rumors that those 'distancing' rumors are just 'pr.'