So, today I'm halfway towards my vacation, which is going to be a staycation.  Everyone who hears I'm taking some time off asks "where are you going?"  While they don't frown when I tell them I'm staying home, I can still see their surprise in their eyes, in the way some of them feel the need to force a small smile.  These people all know I have 180 pounds of dogs.  I can't just pack them up and take them with me.  And Kennels?  They're out.  Lil and Seig just wouldn't understand.  When the dogs have moved on, then I will travel.
I baked another loaf of bread, this time without the olive oil, and it's perfect, stays together.  This one will not crumble to pieces when I try and cut it.  I also bought a bamboo bread cutter, now isn't that nice?  it even has a crumb tray! 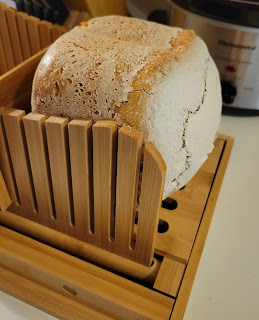 Here's a new video from The Brothers Osborne which I thought fitting since it's Pride month.  His voice is quite reminiscent of Springsteen.
And I saw where Russia took a giant step towards being a police state yesterday, outlawing opposition parties.  Those in charge over there, Putin and his allies, have no regard for human life what so ever.  For them, power is everything.  They do not understand the world is changing.  They, like the Republican party in America, will only ever see things through old lenses.  Their desperate attempt to turn back time, to return to the infamous days of Stalin and Lenin, will lead to Civil War.  They will never learn until they get the snot beaten out of them.  Power is the most corrupting force in the Universe.  Democracy is the only answer.
Posted by Dave R at 7:01 AM