The people over there

Yesterday was slow in the store.  I spent most of the day fixing problems:  an expensive Coolaroo blind needed to be remade, the measurements were wrong, build a quote for 2 bathrooms that hadn't been included when a job was sold... same old shit... crap... stuff.

One funny thing happened when I got to my locker.  One of our associates was standing waiting for me.  I know this because he said, "I've been waiting for you."  I told him I had been on vacation, and he shrugged.  Swinging open his locker door he said, "I bought your books, can you sign them for me?"  Of course, what's an author to do?  Later, when I found out he was planning on selling them on Ebay, I laughed.  My signature is worth about 2 cents.  On the bright side, he did buy for books!

When I got home from work, I discovered some sort of vague imprints on the outside of that little 5 gallon tank I set up for the Goldies.  It's sitting on top of the record cabinet, so I'm figuring Biggie stuck his nose against the glass while checking out the new fish.  Later in the evening, I found him sitting in front of the tank just watching them swim back and forth, and I'm sure his little doggie brain was thinking "simply fascinating."

This morning, I'm going to do one the rides I like on Tacx.  San Remo, possibly.  San Remo is 24 k railroad line that has been converted into a bike trail, though a lot of people walk rather then ride.  It is very scenic.  I usually ride 14 miles. 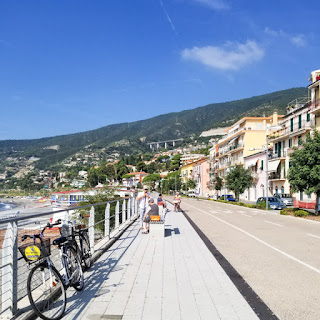 So, Iran had an election and a hardline conservative won... by a landslide, not because he was popular, rather many, many people chose to boycott and not vote.  Ouch.  While we over here didn't have voters boycott the 2016 election, a large proportion of the voting public stayed home... and look what we got, and Orange Anus, a loser extraordinaire.  That over here.  Over there?  Iranians may have something worse to deal with... a hardline conservative who sees no middle ground.  I'm sure it will not be long before the people begin to realize they've made a mistake.