Lily has a booboo paw.  She was fine when I left her out this morning, however when I opened the storm door to let her back in she was sitting there with her left paw raised.  She probably stepped on a pebble.  From time to time, all of my dogs have had booboo paws.  The paw will be favored for a few hours, until something exciting happens, like a FedEx truck or a UPS truck stops out front and they need to run, then the booboo disappears.

I read the reports on the tests I had earlier in the week: I'm ducky dandy.  Well, that's not entirely correct, the CAT scan of my lungs pointed out the arthritis in my spine, though noted there was 'no abnormal deformity.'  Wow, now ain't that a relief.

And the temps today are supposed to crack a high in the mid-90's (F).  Central Air is on, so are the ceiling fans.  Also the drapes in the front bedroom are pulled tight.  I get south eastern exposure, full sun, which turns the windows into very large heat pumps.

And for those of you who think my Pixel phone is now a useless piece of technology, think again.  The only thing I can't do with it is make phone calls.  Thanks to Wi-Fi, it's still connected to the Internet.  Instead of becoming junk, it has become a mini-tablet, so to speak.  Here's a pic I took a few minutes ago of one of my budding dahlias, the ones that survived the freezing winter. 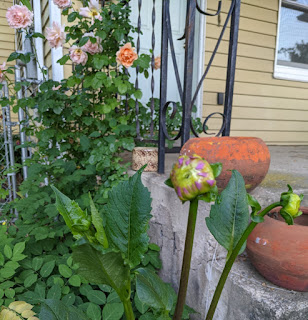 And here's a bit of a funny, ha-ha moment from Vlad the Puty Boy regarding the insurrection of January 6.  He's saying we have a double standard, that the arrest and punishment of those rioters is no different then his... well, military build up on the border of the Ukraine, and, I suppose, the poisoning of those who oppose him, and the arrest of opposition leaders.  Of course, you know he's got a soft spot in his heart for his old blow bro,  Loser #45.  He's really whiny, isn't he?  Perhaps he's got a booboo paw of his own.