Today is my Hump Day.  Yeah, I know, I'm out of sync with most of the world... but then that's retail.
I found out yesterday that the position I had applied for is going to be changed to a part-time position, so I said "thanks, but no thanks."  I want to pay off my car before I even consider going part-time.
Evidently Independent voters who have supported the Idiot Jerk in the White House solely because of the economy are... leaving.  Republicans too, are slowly beginning to sour on the Liar in Chief economic policies.  They are growing concerned about Tariff Wars and their increasing damage to the American economy.  Prices are going up.  I see examples everyday at work.  This past week dirt cheap indoor / outdoor carpet that sold for .40 a square foot last week saw a price increase of 7 cents.  Some may say "hey, what's 7 cents?"  When a product goes from .40 to .47 that's a substantial price increase... it's like... 18%.  Two weeks ago our Lifeproof vinyl flooring went up .20 cents a square foot.  Corporations got a really large tax break... so why the cost increases?  The American people are paying for the Idiot Jerk's Tariff Wars and Independent voters are getting fed up.  They don't realize that in Conservative Economics the little guy is always the one getting nailed.
And I guess some white Republican is racist letters to the Mayor and City Council members of Charlotte.  Of course the writer is quoting the Idiot Jerk in the White House.  This will continue until he is voted out, and even then the stains of his presidency will remain for years to come.
Anyway, I bought myself a 'bike' pillow. 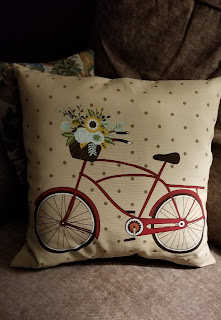 Mostly because it has a red bike on it (like mine) and because it was on Clearance at work.  Half price off.  The only things going down in price are seasonal items, everything else is going up.
My next cycling challenge is to complete the Eistobel route.  It's 16.7 miles long with hills, one with a 9.4% grade (steep).  I've gotten 2/3 of the way through it.  What's stopping me from completing the route?  The hill of a lifetime... of course.  Big.  And I know, once I climb it... in the not too far distance there will be another, larger hill of a lifetime.  So many treasure their down hill rides and their little valleys, but in the end it's always the hills that let you grow... and they can be a little scary.