Okay, so it's Thursday and I have to go back to work... for an entire week.  That's right, 40 hours.
Lily still has a runny nose and sneezing, Seig is fine.  Just like human colds, dog colds run their course in the about the same amount of time.
When I checked my bank account yesterday I saw that Social Security decided to give me a little blessing.  They do this from time to time.  They look at what I'm earning and what they're giving me and give me an additional check and an increase.  It always happens in July since I officially retired in June... 4 years ago.  I think it's because I'm still working full-time and still pumping money into my Social Security account.  I always tell people, you don't have to stop working because you retire.
For those who don't know... and I know there are some of you out there, I ride bike.  I'm also a member of Strava, if you want you can join for free and follow me here.  Yesterday they emailed me my stats for July. 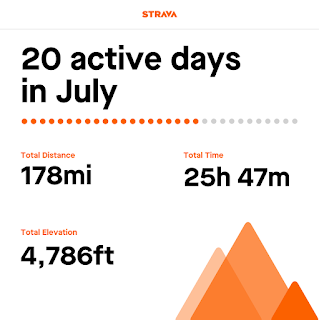 As you can see, I easily beat that 100 mile challenge.  Yesterday I rode for 11.5 miles up near Reykjavik on a ride that was supposed to take me to the Blue Lagoon.  It's actually not a lagoon, it's a lake, and I was a bit disappointed.
Though, I have to admit, I was not nearly as disappointed as the Idiot Jerk in the White House when he got to Dayton, Ohio.  They didn't kiss his ass and he was really upset.  He lied.  Called people dishonest because they were truthful.  And he whined.  Instead of understanding their grief and anger at the violence which has struck their communities, he selfishly Tweeted out his vehemence.  Like most Conservatives, this shoddy example of a failed human being, this loser hates the truth.  A long time ago corrupt politicians were dipped in tar, rolled in feathers, and ridden out of town on a rail.  It's time we get the rail.  It's time we said "ride this."
Posted by Dave R at 6:33 AM