I didn't go for a ride last evening - rest day, and it's always odd when I do that, the extra time I suddenly have on my hands.  Don't worry, I can always find something to do.  Like set up my new coffeemaker, which took all of about 15 minutes.  Yes, there was some assembly required.  This isn't one of your 'plug and pour' coffeemakers.  The old blue one is in the trash.  Normally, I'd set it out on the curb on garbage day for scavengers, however because of the 'programming' issues, that fact that it turns itself on at random times, I was concerned about the fire hazard it presented.  So, out in the trash it went.  Here's what the new one looks like on my counter. 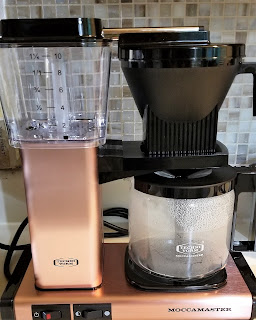 I think the copper finish goes well with my tile.  I will have to figure out what to do with the electric cord, which is definitely more substantial then the power cord on the last coffeemaker.
So, I guess the Idiot Jerk and some of his minion, like Stevie Mnuchin, had planned on ending quite a bit of Foreign Aid - "too much fat," were the words they were bandying about.  For those who don't know it, this is what half-assed Corporate Greed looks like.  The deficit is rising at an astounding rate and, and like all true Conservatives, this administration tries to cut programs which help.  They are anything but smart.
And I saw Macron gave Boris some crow meat for that pie he and his fellow Brexiteers are going to be eating in a couple of months.  Boris' problem is that he longs for the 'old days,' when the UK was an empire.  Those days are gone.  The same thing is true for the Nationalists in this country who desperately want us to be the only 'super power.'  They don't understand their definition of 'power' is no longer valid.  Allies are very important.  The world learned that lesson from the two World Wars, however Conservatives don't like that definition.  They turn away from the idea that more allies you have, the stronger you are.  Evolution happens to everything;  species, politics, religious beliefs.  Unless you adapt, you will die off.  The old beliefs are entering their death throes.  Isolation is not the key to survival.  'I' and 'my' are not the correct pronouns.  There is no way to stop globalization.  Because of this we are living in interesting times.
Oh crap, I just dumped out my recycling can because there was a little opossum in it.  I have to make sure he gets away before I let the dogs out.