So, I'm sitting here waiting for tickets to go on sale for Yestival 2017.  Most of the original members of the group 'Yes' will be at the Hershey Theatre on August 14, and I couldn't think of a better venue to see these neo-classic rockers.  The pic below is close to where I'm going to be sitting, those a bit closer to the center.  Show should be great! 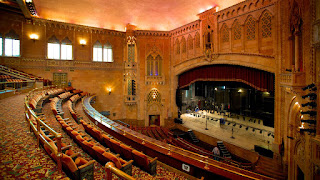 Prior to shows, clouds will actually move across the ceiling and when the theatre darkens the stars come out.  Neat.
And the terribly choreographed song and dance amateur hour continues at the White House.  This morning I was sitting in a restaurant having breakfast with my brother when my phone vibrated with a BBC New update, that's right, the BBC, one of my favorite news sources,  According to them, the Idiot threatened Comey in a Tweet, something about 'hoping there aren't any tapes' of conversations between the two of them.  I know some are thinking the Idiot did the recording, but me? Not so much so.  I'm wondering if the Idiot, himself, might not be worried Comey might have been wearing a wire.  Ah, I'm sure those conversations would be juicy as hell.  No pussy talk.  Just an angry Idiot furious that he might be one of those under investigation.  Now wouldn't that just be ducky?
And, of course, by now, everybody who is anybody is shouting out about the Idiot's slightly veiled threats.  This is how the resistance grows, how every time he opens his trap his minority of supports shrinks.  I'd say pardon my language but... what's to pardon?  This guy is dumb as a fucking brick.