The Price of Loyalty

So, I called off work today.  Rainy weather, combined with a pressure system has my arthritis aching... and I just didn't feel like trying to sell carpeting or blinds to non-existent customers; rain truly does effect the footprints passing through our store.  Even though it's been over a year since I last called off, I still got the same, curt response:  "okay, I'll put you in," and then the disconnect.  This is how life is, there is no question of my loyalty, just the aggravation of being short staffed, even on a weather crappy day.  They're not going to use that as a reason to fire me... unlike the Idiot in the White House.
You see, one of the Idiot's many problems is that he believes that because a minority party managed to squeeze him into the Oval Office through the back door of the Electoral College, he is now the Supreme Commander.  Someone needs to tell him that the Supreme Commander is only a character in the Marvel Cinematic Universe and even though he looks cartoonish as hell, Disney would never hire him to play that part.  This is, however, beyond the Idiot's comprehension level; he's a business man, remember.
The Idiot, it seems, feels that he deserves unwavering loyalty, a dedication which supersedes all that is fair and good and right.  He wants people to say "yes sir," with out question.  Democracy?  Get over it, people.  The Idiot is in charge... right.  I suspect there is so much seething hatred running through the Idiot's brain right now just about everybody is disloyal, which means all of his sycophants must really have their hands full. 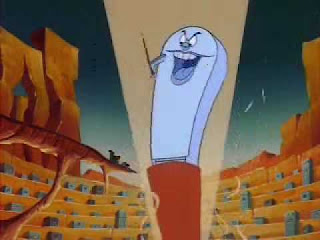 And this is fine, you know?  Because all of the disrespect people have for the Idiot is burning little holes in his brain, and instead of learning from his mistakes, he just fills those holes with lies and blame.  The Idiot loves to blame.  He claims that fake media is to blame... not that it isn't in a minor way.  What he's done is throw red meat to the media, and they're on it like a dog on a bone.
In fact, I wouldn't be surprised if all of this disloyalty isn't making the Idiot rather paranoid.  I mean... who is loyal to him?  The military?  Hhhhmmmm, could be?.... not.