So, the Idiot met the Saudi King.  Fox news shows the handshake, they don't show the bow, or as some are calling it, the curtsy.  Call it want you want, he bowed his head then did a little dip, or maybe you want to call it a booty drop, which is totally acceptable when you remember how hugely impressed he is with strong leaders, and let's be honest here, the King of Saudi Arabia is about as authoritarian as you can get.  What makes this even funnier is that prior to the Idiot's dip, someone said, "Bow commoner, bow before the King," in Arabic.  Don't you love the 'commoner' bit?  Let's face it, the Idiot's about as common as lower case letters can get.
And I think it's funny how the Conservatives heaped criticism after criticism on Obama while totally failing to point out that there guy did the very same thing.  The Washington Post, a conservative media outlet (whom the Idiot hates because of their honesty) does a pretty good comparison.  But then we know crazy conservatives will never, ever acknowledge how screwed up they are. 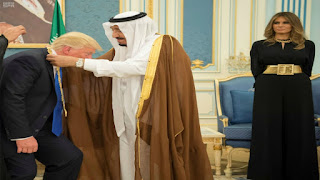 Next stop on the journey?  Israel, where I understand that his suite is going to be bomb proof.  As I'd said before, the security for the Idiot's visit is going to nearly bankrupt smaller countries, like Israel, and Italy.
Well, it's off to work.  For some of you this maybe Sunday, but for me?  It's Friday... again; off Monday and Tuesday.  They will be my last 2 days off in a row for the next 2 weeks - Memorial always screws up days off, though I'm not schedule to work the actual holiday.  Go figure.